The following sermon is one of the few from half century ago that I can legitimately say I remember hearing! With the spike in Civil Rights consciousness that grew out of the August 1963 March on Washington[i], Sidney Ballon spoke on the topic a few weeks later on Rosh Hashanah morning. While he was acutely aware of the tempo of his times in all eras, he was hardly a fan of the popular music of the younger generation. So for him to demonstrate that he was not only aware of the voice of Bob Dylan, but also clearly moved by the message, was very memorable for his teenage son.

As is often the case throughout reading these archives, one cannot help but notice that the language, especially regarding race, was very different in that era. Despite what is now outdated terminology, the sincerity of Rabbi Ballon’s plea for equality among all people is unmistakable.
How could we possibly retain our integrity as Jews, if we did not become involved in this effort to advance the cause of justice for others today when we have so long pleaded for it and yearned for it so deeply for ourselves in the past?

Yes, all about us the winds of change and crisis are blowing, and within the turbulence an answer is being fashioned to the many questions that disturb us. What kind of an answer will it be? Will it be an answer that brings frustration and destruction as if blown by the wind of the hurricane, or will we have the wisdom to harness the winds so that they will yield an answer that will contribute to the well being and dignity of all men. At every service throughout the year we pray that God grant us peace and that he strengthen the bonds of fellowship and friendship among all the inhabitants of our land. May we, indeed, particularly on this Day of Judgment, resolve that this shall also be the spirit of the answer that we shall wrest from the blowing wind.

[i] The March on Washington for Jobs and Freedom (or "The Great March on Washington") was one of the largest political rallies for human rights in United States history and called for civil and economic rights for African Americans. It took place in Washington, D.C. on Wednesday, August 28, 1963. Martin Luther King, Jr., standing in front of the Lincoln Memorial, delivered his historic "I Have a Dream" speech advocating racial harmony during the march. The march is widely credited with helping to pass the Civil Rights Act (1964) and the Voting Rights Act (1965).
[ii] Amos 5:24 But let justice well up as waters, and righteousness as a mighty stream.
[iii] Nachshon was, according to the Book of Exodus, the son of Amminadab; descendant in the fifth generation of Judah, brother-in-law of Aaron and an important figure in the Hebrew's Passage of the Red Sea which according to the Jewish Midrash he initiated by walking in head deep until the sea split.
[iv] Lakeview, Long Island, NY is a small predominantly African-American community adjacent to West Hempstead and Malverne, two predominantly white communities in the 1960’s and presently. In 1963, the New York State Education Commissioner responded to complaints by the NAACP and Black parents living in Lakeview that the Malverne School District was racially segregated. He ordered the reorganization of all of the district's elementary schools to insure that they were integrated. The proposed plan assigned different grades to each of the district's three elementary schools and required that children be bused away from their neighborhood schools. Because of the threat of forced busing "white parents started pulling their kids out of public schools and sending them to Catholic or other religious schools. They also protested by electing school board candidates who took their side and voted down school budgets which included money to fund busing.
[v] This is likely to be a reference to the bombing of The Sixteenth Street Baptist Church in Birmingham which was used as a meeting-place for civil rights leaders such as Martin Luther King, Jr. and Ralph Abernathy. Tensions became high when the Southern Christian Leadership Conference (SCLC) and the Congress on Racial Equality (CORE) became involved in a campaign to register African American to vote in Birmingham.  On Sunday, September 15, 1963, a white man was seen placing a box under the steps of the Sixteenth Street Baptist Church. Soon afterwards, at 10.22 a.m., the bomb exploded killing Denise McNair (11), Addie Mae Collins (14), Carole Robertson (14) and Cynthia Wesley (14). The four girls had been attending Sunday school classes at the church. Twenty-three other people were also hurt by the blast. Civil rights activists blamed George Wallace, the Governor of Alabama, for the killings. Only a week before the bombing he had told the New York Times that to stop integration Alabama needed a "few first-class funerals."
[vi] Blowin' in the Wind, written by Bob Dylan in 1962 was released on his album The Freewheelin' Bob Dylan in 1963. In 1999, the song was inducted into the Grammy Hall of Fame. In 2004, it was ranked #14 on Rolling Stone magazine's list of the 500 Greatest Songs of All Time.
Posted by Unknown at 9:33 PM 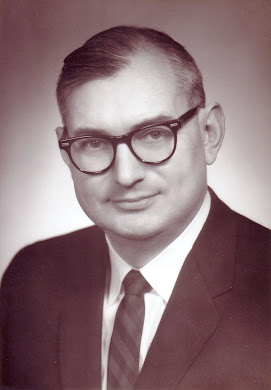 After the untimely death of my father in 1974, I helped my mother unburden herself of his worldly possessions. My father had been a saver. There was much to dispose of. When I came across the files of his sermons I had the immediate instinct to ask to preserve them without any specific understanding of what I would ever do with them or what they would mean to me. This was a very fortuitous act. Nearly 37 years later, approaching the centennial of his birth, I felt the urge to open these archives for the very first time. Throughout the months that I have been reading them I have learned much about history, Judaism, my father, and to some degree myself.

When I complete reading them I intend to select some to publish as a lasting testimony to his deep convictions, his integrity, and his eloquence. Not knowing how long that may take to accomplish, I offer this blog to make available, throughout this centennial year, some of the sermons that have moved me most.

Please enter your email address below and/or subscribe to this blog to be advised of new postings as they occur. 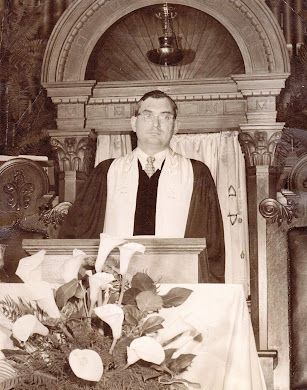